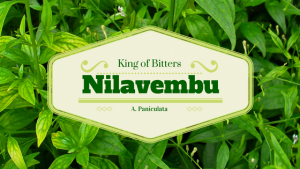 Since ancient times Nilavembu (A. paniculata ) has been used as a traditional remedy for treating various ailments in Siddha and Ayurvedic systems of medicine as well as in tribal medicine, Unani, Homeopathy and traditional Chinese medicine.

Commonly known as Kirayat in Hindi and as Andrographis or King of bitters in english. In Ayurveda it is called Kalmegh or Kalamegha, meaning “dark cloud”. Most vernacular names of Andrographis come from its strong bitter taste. Meaning of Nila-Vembu is “Neem of the ground” as the plant has strong bitter taste as that of the Neem tree, defying its small size. In Malaysia it is called Hempedu Bumi which means “Bile of Earth”.

Nilavembu can easily be found in both planes and hilly regions of India. It is a herbaceous annual or sometimes biennial plant found in abundance in Indian Subcontinent, Southeast Asia and China but it is native to Southern India and Srilanka. It is an introduced species for Northern parts of India.

Nilavembu is one of the most popular medicinal plants used traditionally for the treatment of various diseases such as cancer, diabetes, high blood pressure, ulcer, leprosy, bronchitis, skin diseases, flatulence, colic, influenza, dysentery, dyspepsia and malaria for centuries in Asia, America and Africa continents. In China, India, Thailand, and Malaysia, this plant has been widely used for treating sore throat, flu, and upper respiratory tract infections. Every part of the plant can be used as medicine.

• A simple decoction made of Nilavembu leaves or powder helps in treating many diseases
• Paste made out of fresh leaves can be applied directly on skin eruptions and allergic skin reactions.

• Though Nilavembu is considered safe even for kids some studies indicate its adverse effect during pregnancy and hence it should be avoided by pregnant women.
• The herb may cause lose motions or rashes in some people. In such instances it should be immediately discontinued.

Disclaimer: The information provided is for educational purpose only intended not an alternative to medical advice from your doctor or other professional healthcare provider. Please consult your physician, or health care provider before taking any herbal remedies. Read more about our disclaimer https://www.yogisherbs.com/medical-disclaimer/

Our mission is to spread awareness about the medicinal properties of these natural and safe herbs all over the world and to make it easily available through this store for all those who want to enjoy its benefits.
View all posts by yogisherbs →

This site uses Akismet to reduce spam. Learn how your comment data is processed.

Shopping cart0
There are no products in the cart!
Continue shopping
0